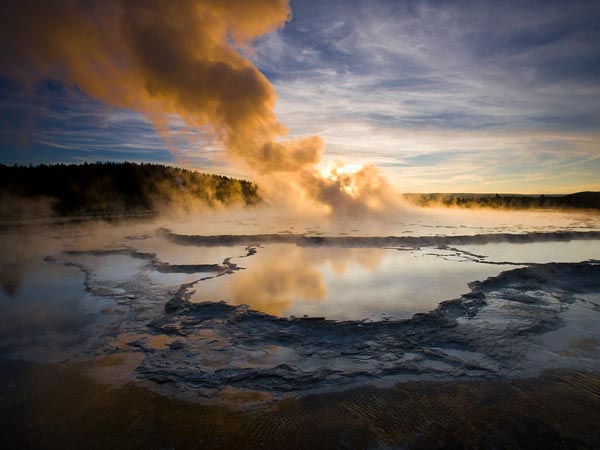 The huge volcanic crater that makes up much of Yellowstone may have seen more so-called super-eruptions than previously thought, a new study says. What’s more, Yellowstone’s super eruptions may be slightly less super than suspected—but still strong enough to destroy all of Yellowstone and more, researchers say.

Much of Yellowstone National Park—which covers parts of Idaho, Montana, and Wyoming—lies in a roughly 40-mile-wide (70-kilometer-wide) crater formed by the collapse of a massive volcanic cone during the area’s most recent super-eruption, some 640,000 years ago.

Before then, Yellowstone had seen two other super-eruptions: one about a million years ago and another about two million years ago. Now, however, it seems the earliest blast might actually have been two cataclysmic explosions, thousands of years apart.

Among geologists, it’s no secret that the two-million-year-old Yellowstone lava deposit has three layers.

“That got us thinking whether these things were representing different magma batches [from a single eruption] or different events,” study leader Ben Ellis, a volcanologist and postdoctoral researcher at Washington State University, told National Geographic News.

Ellis’s team examined rock samples from all three layers using the latest isotope dating techniques, which rely on the known rates of decay of certain elements to date objects.

It turns out that the uppermost layer of the roughly two-million-year-old lava deposit—about 12 percent—was laid down about 6,000 years later than the other two layers, according to the study.

This suggests that the supervolcano’s active periods may span thousands of years and feature multiple, slightly weaker eruptions—that “explosive volcanism from Yellowstone is more frequent than previously thought,” Ellis said in a statement.

The findings also raise the question of whether the other two layers represent separate eruptions, currently an unsolvable mystery, since even the latest dating techniques have relatively wide margins of error.

“Right now plus or minus 4,000 years is about as good as we can do [when dating] rocks of this age,” Ellis said.

(Find out what’s really going on under Yellowstone and how the next super-eruption could unfold in “When Yellowstone Explodes” [National Geographic magazine, August 2009].)

Though the team’s findings split that first Yellowstone super-eruption into two smaller blasts, Ellis points out that even the second, smaller eruption would have been an explosion for the ages.

The larger of the two proposed blasts would still rank as the fourth largest eruption known to science. “It’s definitely big,” Ellis said. “We’re not taking that away.”

The new findings have no bearing on the spacing of the millennia-long active periods, and Ellis refused to speculate about when the next super-eruption might occur.

But if such a blast were to happen today, he said, all of Yellowstone National Park would probably be devastated. What’s more, “the ashfall would likely be all over the continental U.S.,” he said.

One thing’s for sure: Yellowstone—rising on a bulging magma pocket, seething with volcanically heated geysers and hot springs—is still very much alive.