What If? Mapping Nuclear Fallout 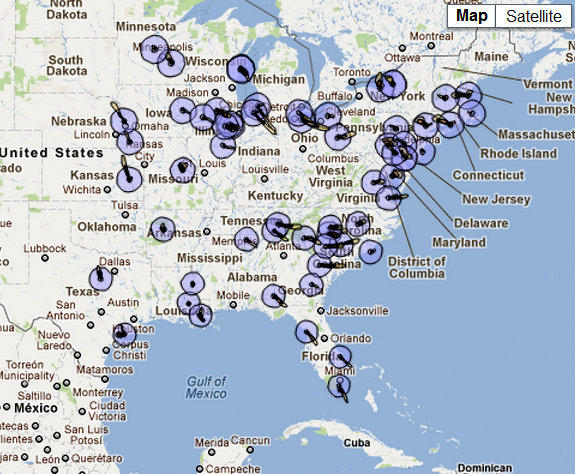 One year after the Fukushima disaster in Japan, the nuclear industry is still grappling with how to handle the risks that come with extreme natural disasters.

What if something similar happened in the United States? According to the Natural Resources Defense Council, there were five nuclear shutdowns in the U.S. last year, all due to natural disasters including two tornadoes, an earthquake, a hurricane and flooding. The group has released a map showing what it says could happen if a disaster like Fukushima occurred at one of the country’s 104 reactors. Click here to enter your zip code and measure what the nuclear fallout would have been in your area.

The group attempted to model the airborne plumes of radiation that might occur if one of those reactors lost both primary and backup power for even a few hours. The NRDC’s map, however, is based on the actual weather patterns in the U.S. on March 11 and 12, 2011—not taking into account the high winds that might take place during a severe weather event.

For more on mapping potential nuclear fallout, read more from this article on National Geographic’s site, or visit the NRDC’s fallout page.