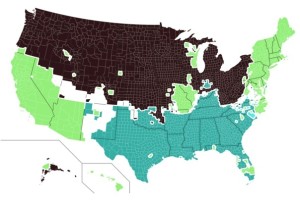 This excerpt is taken from an excellent article by Samuel Arbesman, a senior scholar at the Kauffman Foundation and a fellow at the Institute for Quantitative Social Science at Harvard University.

When we think about borders, we tend to think of administrative boundaries. Those demarcating lines, often grown out of rivers and mountain ranges or diplomatic quirks, govern our daily lives, and that’s doubly so if we live near a neighboring country or state.

We know that these boundaries are on some level unnatural. Driving around Kansas City, where I live, makes this abundantly clear. Gas price differences aside, it can be difficult to tell which state you’re in, Missouri or Kansas, and the small street of State Line Road does nothing to make it clearer.

But are there more organic borders, brought to life by our own actions and activities? I recently set out, along with a team from MIT and AT&T, to see if I could find an answer. Previously, members of our group had collaborated to use mobile phone call and text message records to determine how tightly connected different counties are to each other. But communication is far from the only way in which we are connected or separated. We can be connected based on where we move, how we speak, and even what sports teams we root for.

So our research team, consisting of DeDe Paul of AT&T, Vincent Blondel of Belgium’s Université catholique de Louvain, IBM’s Dominik Dahlem, and myself, set out to understand how a variety of cultural and social properties create borders, and whether or not these borders actually overlap. Are there in fact natural boundaries to the borders that we create as social creatures?

One of the clearest regional differences in the U.S. can found by tracking the words people use to refer to soft drinks, which is in fact the map at the top of this story. Pop or soda, or even Coke, these small linguistic differences are not as small as we might think. While “soda” commands the Northeast and West Coast (green) and “pop” is in between (black), “Coke” reigns in the south (turquoise). These small distinctions can often act as touchstones for larger cultural differences.

For more fun comparisons, we encourage you to read the full article and view the beautiful map gallery that accompanies this piece on the borders which define us.