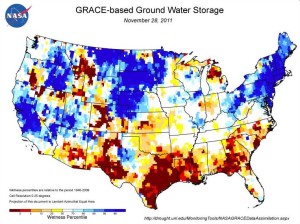 ScienceDaily (Nov. 30, 2011) — The record-breaking drought in Texas that has fueled wildfires, decimated crops and forced cattle sales has also reduced levels of groundwater in much of the state to the lowest levels seen in more than 60 years, according to new national maps produced by NASA and distributed by the National Drought Mitigation Center at the University of Nebraska-Lincoln.

“Texas groundwater will take months or longer to recharge,” said Matt Rodell, a hydrologist based at Goddard. “Even if we have a major rainfall event, most of the water runs off. It takes a longer period of sustained greater-than-average precipitation to recharge aquifers significantly.”

The maps are based on data from NASA’s Gravity Recovery and Climate Experiment (GRACE) satellites, which detect small changes in Earth’s gravity field caused primarily by the redistribution of water on and beneath the land surface. The paired satellites travel about 137 miles (220 km) apart and record small changes in the distance separating them as they encounter variations in Earth’s gravitational field.

To make the maps, scientists used a sophisticated computer model that combines measurements of water storage from GRACE with a long-term meteorological dataset to generate a continuous record of soil moisture and groundwater that stretches back to 1948. GRACE data goes back to 2002. The meteorological data include precipitation, temperature, solar radiation and other ground- and space-based measurements.

The color-coded maps show how much water is stored now as a probability of occurrence in the 63-year record. The maroon shading over eastern Texas, for example, shows that the level of dryness over the last week occurred less than two percent of the time between 1948 and the present.

The groundwater maps aren’t the only maps based on GRACE data that the Drought Center publishes each week. The Drought Center also distributes soil moisture maps that show moisture changes in the root zone down to about 3 feet (1 meter) below the surface, as well as surface soil moisture maps that show changes within the top inch (2 cm) of the land.
“All of these maps offer policymakers new information into subsurface water fluctuations at regional to national scales that has not been available in the past,” said the Drought Center’s Brian Wardlow. The maps provide finer resolution or are more consistently available than other similar sources of information, and having the maps for the three different levels should help decision makers distinguish between short-term and long-term droughts.

“These maps would be impossible to generate using only ground-based observations,” said Rodell. “There are groundwater wells all around the United States and the U.S. Geological Survey does keep records from some of those wells, but it’s not spatially continuous and there are some big gaps.”

The maps also offer farmers, ranchers, water resource managers and even individual homeowners a new tool to monitor the health of critical groundwater resources. “People rely on groundwater for irrigation, for domestic water supply, and for industrial uses, but there’s little information available on regional to national scales on groundwater storage variability and how that has responded to a drought,” Rodell said. “Over a long-term dry period there will be an effect on groundwater storage and groundwater levels. It’s going to drop quite a bit, people’s wells could dry out, and it takes time to recover.”

The maps are the result of a NASA-funded project at the Drought Center and NASA Goddard to make it easier for the weekly U.S. Drought Monitor to incorporate data from the GRACE satellites. NASA’s Jet Propulsion Laboratory, Pasadena, Calif., developed GRACE and manages the mission for NASA. The groundwater and soil moisture maps are updated each Tuesday.