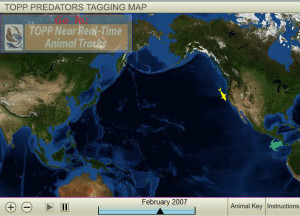 Tagging of Pacific Predators began in 2000 as one of 17 projects of the Census of Marine Life, an ambitious 10-year, 80-nation endeavor to assess and explain the diversity and abundance of life in the oceans, and where that life has lived, is living, and will live.

Several dozen TOPP researchers from eight countries began venturing into offshore waters, remote islands, and along rugged coastlines to attach satellite tags to 22 different species of top predators that roam the Pacific Ocean. As of 2007, they have tagged more than 2,000 animals, including elephant seals, white sharks, leatherback turtles, squid, albatross and sooty shearwaters.

As these animals began sending back data via Argos, a polar-orbiting satellite, they opened the door to a world we’d never seen before: a picture of their migration routes and their ecosystem…through their eyes. We humans were finally able to witness their journeys through, what is to our human perspective, featureless blue waters. We’ve learned that many of these animals use those routes as regularly as college students migrating to Florida for spring break. Marrying other satellite imagery to the animals’ tracks, we’ve started to identify the ocean equivalent of desert oases or the watering holes of African savannahs, where the animals gather to feed and to breed. A big question is: how do these ocean animals know where to find these “hot spots” that continuously form and swirl through the seas?

These voyagers are giving us better data to protect the endangered species among them, such as leatherback turtles, black-footed albatross and blue whales. They’re also providing information to better manage fisheries — such as bluefin tuna, yellowfin tuna, and swordfish — that risk collapse or threaten the survival of other species caught in nets and long-lines.