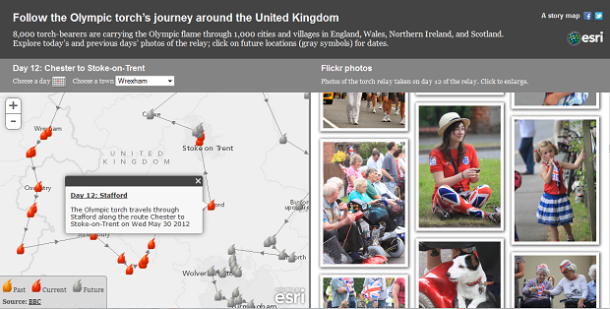 Are the Olympics here again already? It seems like just yesterday we were all gasping over the opening ceremony in Beijing.

But yes, they’re here, or will be as of July 27 (in London of course). ESRI has provided the technological muscle behind a map story that will help you wake up to the coming arrival of the games and get your Olympic juices flowing (along with your feelings of international brother- and sisterhood).

The site’s title pretty much spells out what the interactive concoction allows you to do: “Follow the Olympic torch’s journey around the United Kingdom” as it makes its way toward London for the traditional ritual of “lighting the Flame” to usher in the games.

There’s a fire-filled map on the left that traces the Olympic Flame’s progress through such Britishly named locales as Stoke on Trent, Shrewsbury, and Trowbridge (the Flame will travel to within an hour of 95 percent of people in the U.K., the Isle of Man, Guernsey, and Jersey, says one of the official Olympics sites).

When you click on a flame (try one of the yellowish ones), the right pane refreshes to show you Flickr-posted photos taken at that locale. You can click on photos to enlarge them, and you can scroll around on the map and zoom in and out.

That’s about it, as far as we can tell. It’s a simple setup, but it’s a lot of fun. And it does a great job of getting you in touch with the sort of excitement, civic pride, and neighborly bonhomie that exist at events like this.

It also shows you the homespun greetings that various small-town characters devise for the illustrious visitor. 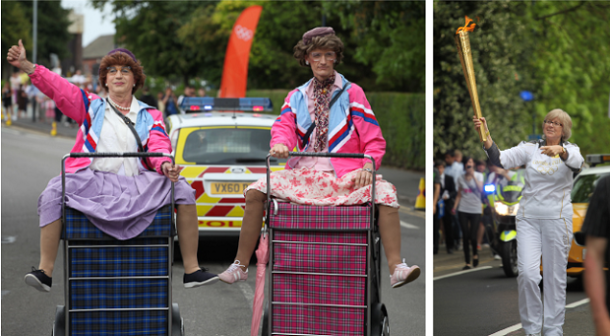 One photo we stumbled on played well with this — it had nothing to do with the Olympic torch, really; it simply showed a formation of geese that happened to fly overhead as the torch scuttled through. But it made it seem as if the villagers had specially trained a squadron of birds to mark the occasion (apparently they couldn’t afford to hire jet planes). And the villagers themselves might have been struck by that thought as well (somebody, after all, thought to snap a photo). We felt as if we had made eye contact with someone in the crowd, and that we had all shared a smile about this amusing bit of happenstance.

The site provides a nice, salt-of-the-Earth counterpoint to the large-scale official opening ceremonies that kick off the games (as great to watch as those ceremonies can be). And as such, it reminds us of what a remarkable tool for human connection the Internet remains.

The official pages devoted to the Olympic Torch Relay make for fascinating reading as well, and they’re a good complement to the interactive map site. The locals chosen to carry the Flame each have their own unique stories, and the locales are rich with history.