A Record-Breaking Tornado Season in 2012 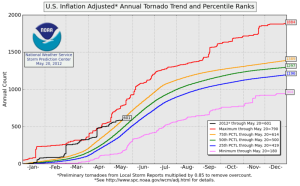 The year began with an unusual number of tornadoes during January 2012. The first major tornado outbreak occurred on January 22–23, when a spring-like system moved across the southern Mississippi valley, producing at least two dozen confirmed tornadoes across Arkansas, Kentucky, Mississippi, Tennessee, and Alabama. As a whole, January was the third most active on record, behind 1999 and 2008.

Another ramp-up in activity occurred in early March, with one of the largest outbreaks ever recorded in the United States for that time of the year. This outbreak produced 160 reported tornadoes, and affected areas across Indiana and Kentucky in particular. Using the adjusted preliminary tornado count (85% of the total preliminary reports in order to remove overcount), 2012 attained record tornado activity on March 23 with 319 reports, eclipsing the previous record of 317.

A relative lull in tornado activity occurred in mid-March, but activity soon rose again by the end of the month when an EF2 killed one person on March 23 near Louisville, Kentucky. The beginning of April also started off active, with a tornado outbreak occurring in North Texas, including the Dallas-Fort Worth Metroplex. An EF2 caused significant damage in the city of Arlington, where a state of disaster was declared. An EF3 also caused significant damage in Forney, Texas; despite this, no fatalities were reported throughout the outbreak. From April 13–16, an outbreak producing over 95 confirmed tornadoes swept across the Midwest, Kansas and Oklahoma in particular. A tornado emergency was issued for the city of Wichita late on April 14 as an EF3 moved across the southeastern portion of the city. A couple hours later, an EF3 in Oklahoma killed six people when it hit the city of Woodward just after midnight. One EF4 tornado was confirmed in Kansas on April 14, where it stripped trees of bark and destroyed a farmstead. On April 30, several tornadoes swept across Oklahoma and Kansas.

It appears 2012 will remain on track to be one of the most active tornado seasons in decades.

At GISetc.com we curate and bring you the best geography and science resources from the web. We hope our sharing will keep you up to date on the latest science and geospatial news. Click here to view the full article in its original format from Wikipedia.