Double the resources, double the fun! As we were researching Super Tuesday topics, we ran across two articles that seemed like they went together. First is a segment from a BBC article on how facebook political involvement can quadruple voting behavior. 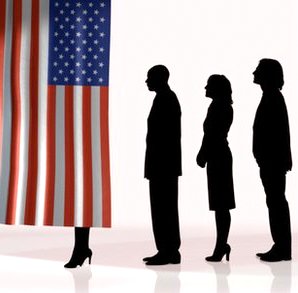 “To look into that question of ‘social voting’, the team arranged for Facebook to post a non-partisan “social” message along the top of 61 million users’ pages, including a reminder that it was voting day, a clickable “I voted” button, a link to information about nearby polling places, and a list of up to six of the users’ friends who had already clicked the button.

About 600,000 users were shown an alternate, “informational” message, identical except for the absence of the friends data. A further 600,000 were shown no message at all.

The data on which users sought polling station data or clicked the ‘I voted’ button could then be cross-correlated with publicly available data on who actually went to cast a vote.

The results showed to a high statistical significance that those who received the “social” message were more than 2% more likely to report having voted and 0.4% more likely to actually vote than those shown the “informational” message.

And users were 0.22% more likely to vote for each “close” friend – as measured by the degree of Facebook interaction – who received the message.

By correlating the findings with polling data and comparing with the “no-message” case, the team estimate that the message resulted in more than 340,000 extra votes being cast.

Prof Fowler conceded that the results represented a small fraction of the voting public, but that it was enough to sometimes make a large difference.

‘I doubt it changed the outcome of the overall election, but it’s possible it had an impact on local elections,’ he said. ‘There are certainly circumstances in our history where a far smaller number of votes would have mattered: in 2000 in the US the presidential election was decided by just 537 votes in Florida.’ ”

Are Republicans or Democrats more active in social media? Are iPhone users more likely to vote for Obama? The majority of likely Romney voters are…women? Take a look at what your mobile device says about your vote. 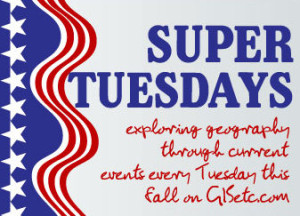 At GISetc.com we curate and bring you the best science resources from the web. We hope our sharing will keep you up to date on the latest science and geospatial news.

With Super Tuesdays we are careful not to endorse either party. We strive to present unbiased links that can spark conversations based on current events in your classroom.