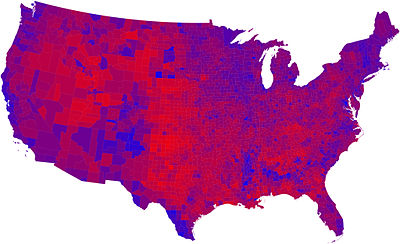 We ran across the Purple America and were mesmerized by how pretty it was. After some digging online, we found an article about “Purple America” on Wikipedia. We love this blended view of our nation’s political landscape instead of the traditional red and blue. This map and philosophy is all about the popular vote, not the electoral college and is a refreshing change.

The following is an excerpt from the Wiki article: “The phrase Purple America refers to the belief that a more detailed analysis of the voting results of recent United States national elections reveals that the U.S. electorate is not as polarized between “Red” America (Republican) and “Blue” America (Democratic) as is often depicted in news analysis. The term reflects the fact that news organizations generally use the colors red and blue on maps to indicate when a state or congressional district has been won by a Republican or Democratic candidate, respectively. Because the American political system often awards a state or congressional district entirely to one candidate (“winner take all”) without regard to the margin of victory, it results in a map that does not reflect the true distribution of “red” or “blue” votes across the nation. The distortions contained in these maps, the argument goes, contribute to the misperception that the electorate is highly polarized by geography.”

At GISetc.com we curate and bring you the best science resources from the web. We hope our sharing will keep you up to date on the latest science and geospatial news.

With Super Tuesdays we are careful not to endorse either party. We strive to present unbiased links that can spark conversations based on current events in your classroom.

Article excerpt from Wikipedia. Click here for the full write-up http://en.wikipedia.org/wiki/Purple_America Cartograms developed by Gastner, Shalizi, Newman at the University of Michigan provide another way to depict election results.