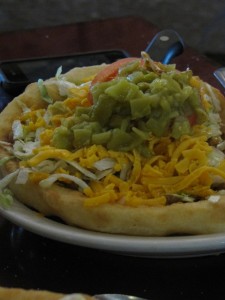 At every opportunity, we ask locals about food.  Today was no exception.  At the Sunrise Crater National Park Headquarters, the park rangers surely did not disappoint us for our fare today.  We were directed to the Trading Post in Cameron, Arizona.  Cameron is approximately 35 miles east of the entrance to the south rim of the Grand Canyon. We had a late lunch at the restaurant with the most exquisite view of the gorge carved out by the Little Colorado River.  It definitely got us excited for one of the natural wonders of the world.  But wait, I’m jumping forward!

We ordered the Navajo Tacos which covered the very, very large plates.  The fry bread was gently browned, not greasy, and had just the right amount of yummy texture.  On top of the fry bread was piled the most delectable beans and beef.  (And I mean PILED)  To top it off, there was plenty of lettuce, grated cheddar cheese, tomato, and chopped green chili peppers.  There was a side of fiery salsa that got the better of me so I opted out, but Roger being the brave soldier, enjoyed the extra sensation the salsa afforded his taco.  We vote three thumbs up on the Cameron Trading Post Navajo Tacos and would suggest a special trip to Cameron for anyone who is within 100 miles! 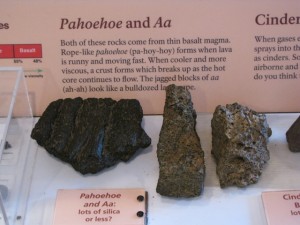 Before we could enjoy our Navajo Tacos with a marginal amount of guilt, we decided to do some mild hiking (definitely not marathon pace).  A short fifteen mile drive took us to Sunset Crater in the Coconino National Forest.  The wild flowers were in full, riotous bloom due to an early monsoon season.  Thanks La Nina! The National Forest Service office there was a treasure trove of interactive exhibits that helped us to understand the creation of the volcanoes in the area.  We spent a few minutes experiencing the seismograph which sensed our motions.  We both had to see the effect of the vibrations that we caused in the earth by jumping up and down.  Yeah, you’ve got the picture…two adults jumping in time to see the solid waves change on the seismograph screen.  Wow,  and you thought you were a nerd! 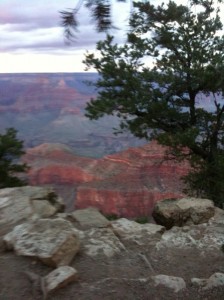 short drive down the road and we were driving on the Bonito Lava Flow.  The awesomeness of this not so distant event, was apparent on every side of the road with dramatic jet black lava juxtaposed amidst the evergreens and wild flowers.  We could see the different configurations of hardened lava, named by the Hawaiians as Pahoehoe and A’a’.  We  enjoyed the short one mile hike on the Lava Flow Trail and ran into a National Forest Service employee.  She was very interested in our use of the Garmin and iPhone GPS receivers and mapping in the park.  We completed the day with a walk in the moonlight on the South Rim of the Grand Canyon watching the last rays of sun glowing on the west horizon from Yavapai Point.  After a fascinating and satisfying day of natural wonders that we hope to come back to see again, we drove back to Flagstaff in silence under a full moon shining bright and playing tag with white, scudding clouds.

As we started on our journey when we touched down in Albuquerque, we have had various types of location devices going.  We are using a simple Garmin Venture to collect tracks and points.  We are both also collecting tracks and waypoints along with accompanying photos using MotionX-GPS on our iPhones.  It is a simple and inexpensive way to gather.  This is an overview map done with ArcMap 9.3.1 and imagery from ArcGIS Online.  As we push forward, we are using other map engines and techniques.  Stay tuned! 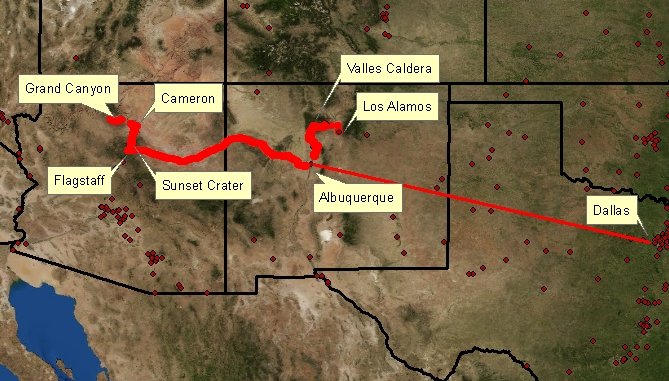