Spectacular High-Res Image of Earth: The Other Side 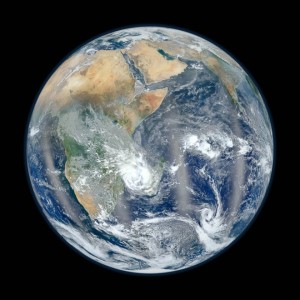 This month, NASA released its 2012 version of the famous “Blue Marble” image. By using a planet-pointing satellite, Suomi NPP, the space agency created an extremely high-resolution photograph of our watery world.

The original photo centered on the western hemisphere, highlighting North and Central America. Responding to public demand, the agency has created a companion image: this time focusing its lens toward the East and showing Africa, Saudi Arabia and India (pictured).

The Suomi NPP satellite hugs the Earth too closely to get this kind of image in one shot. It’s in a polar orbit with an altitude of 824 kilometers, but the perspective of the Eastern hemisphere Blue Marble is from 12,743 kilometers away.