Sizing Up the Potential for Geothermal Energy in Texas 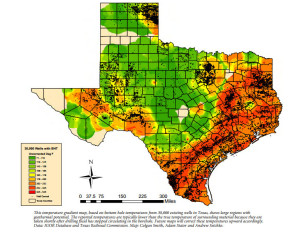 The U.S. Department of Energy (DOE) is in the midst of awarding $360 million in federal stimulus grants for research in this area. Traditionally, geothermal energy has been associated with regions of intense volcanic or hydrothermal activity, like Iceland, which generates more than half of its primary energy from geothermal sources. For decades, however, scientists have wondered if the less volatile subsurface in areas such as Texas could provide economically viable locations for geothermal power.

Bruce Cutright, a research associate at the Bureau of Economic Geology, and colleagues are helping answer that question through several current research projects funded by the DOE. They are drawing together data from a broad range of sources on the geothermal resources in the state for a national, publically accessible geothermal database. Another project will combine a real world test of geothermal energy production with carbon sequestration, another area of active research at the Bureau.

As he surveys resources in Texas, Cutright sees potential for geothermal energy production around an entirely different model that has many of the same benefits of conventional hydrothermal resources. In this scenario, oil and gas companies would coproduce geothermal energy from the same wells as oil and gas. Because the wells are already drilled, there is a path to the surface and no need for additional drilling.

So far in his research for the national database, Cutright has identified more than 17,000 wells in Texas with bottom-hole temperatures above 100 degrees Celsius, an operational threshold for some modern geothermal power plants. Not all of these wells will have the right reservoir properties for geothermal energy production, but it does suggest a potential resource base worth
researching.

“The easiest places for development of this are Texas and Oklahoma with their long histories of petroleum development,” Cutright says, “because it’s the petroleum provinces that I think
will be the first areas to capitalize on these deep hot sediments.”