Signs of the U.S. Drought Are Underground

Drought is plaguing large areas of the U.S. this year. NASA has compiled a collection of maps exploring the drought problems of 2012. Today we are sharing just one of those maps and a small excerpt from their article. We hope you use this data to spark a discussion on your region and how it is affected compared to others. It’s just another way to connect your students to the map, to get them to observe their ecosystem and to follow current events. 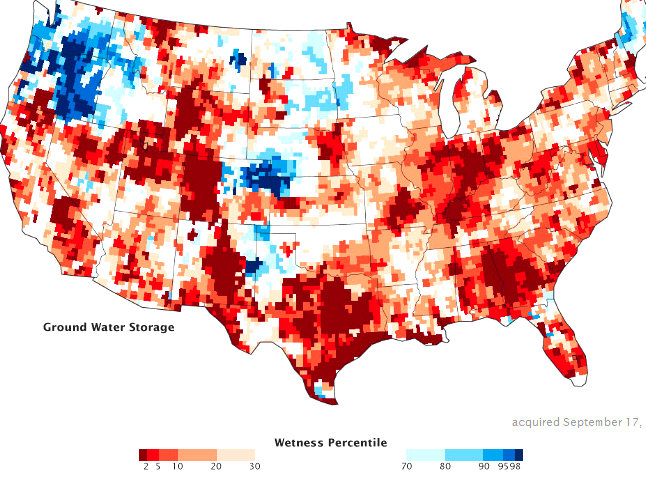 “September 2012 conditions were significantly drier than the norm, particularly in the eastern third of the United States, the Midwest, the High Plains and Rockies, and along the California–Oregon border. Surface and root moisture recently rebounded in the south central and southwestern states, largely due to Hurricane Isaac and other rainfall in 2012. But even there, the severe droughts of 2011 and 2012 persist below ground in aquifers. Groundwater supplies in the Southeast, the Rockies, the Midwest, New Mexico, and Texas are still far below the norm, according to GRACE.

All of the maps [paired with this article] are experimental products funded by NASA’s Applied Sciences Program and developed by scientists at NASA’s Goddard Space Flight Center and the National Drought Mitigation Center. The maps do not attempt to represent human consumption of water; but rather, they show changes in water storage related to weather, climate, and seasonal patterns.

‘GRACE gives you variations in the total water stored on and in the land,’ says NASA scientist Matt Rodell in a recent feature story on the Earth Observatory. GRACE does not measure the water directly, but instead detects changes in Earth’s gravity…By tracking trends in how the satellite orbits change, researchers can calculate how gravity is changing on Earth. So when groundwater supplies dwindled in the United States in 2011 and 2012, that region of the planet had a little less mass and gravitational pull. The satellite orbits moved a bit in response, allowing GRACE to reveal the change in groundwater storage.”

At GISetc.com we curate and bring you the best geography and science resources from the web. We hope our sharing will keep you up to date on the latest science and geospatial news. Click here for the full article and many more drought maps from NASA. Read more about GRACE and studies of groundwater in the new Earth Observatory feature: The Gravity of Water.