As I type this up, all I can think of is the Muppet Show with the segment “PIGS FROM SPACE”…I digress. No, this is not an article about alien penguins or penguins in cute little space suits.  Instead it’s an interesting study about new discoveries of penguin colonies discovered by satellite (discovered by photographing “penguin poo” from space – seriously). Thanks to Fernando Guerrero Chavarria for sending us the link to Penguins from Space for our blog! Great stuff!!!

Here is just a small excerpt of their findings: 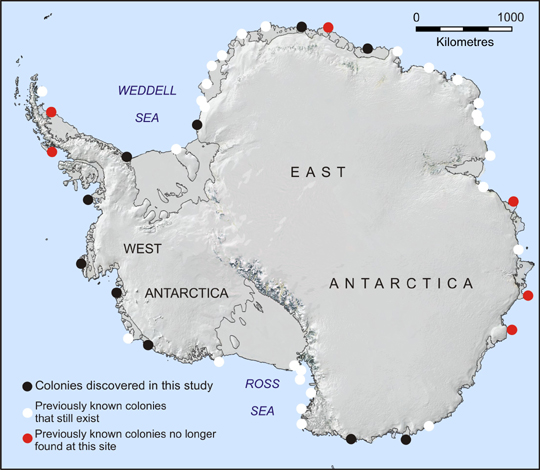 “In 1911, three explorers defied perilous weather conditions in the darkness of the Austral winter to retrieve an emperor penguin egg. Nearly a century later, scientists find novel ways of using modern technology to continue their research on a species that only breeds in the most inaccessible of locations.”

“Emperor penguins (Aptenodytes forsteri) breed in colonies on the sea ice that surrounds much of the coast of Antarctica. These colonies can range in size from a few hundred to many thousands of pairs, however, scientists have been unable to estimate the total number of emperor penguins in Antarctica. The colonies generally only exist in the most inaccessible of locations and access during the harshest weather conditions is extremely difficult. In addition, we don’t know where all the colonies are located.”

“Estimates of the total number of penguins range between 200,000 and 400,000 pairs, but changes in the sea ice on which they breed can affect their breeding success and the size of the colony. We therefore need a more accurate assessment of their numbers to help us monitor future penguin population changes, and in particular, their response to climate change.”

“The satellite pictures revealed 38 colonies, 4 more than were thought to exist. Of the 38 colonies found: ten are new; six that were previously thought to exist were not found or have disappeared; and; six have been re-positioned by over 10km.”

“Finding the colonies is just the first step towards an accurate count of emperor penguins. Next, scientists will use other techniques, including high resolution satellite data, to count the number of penguins in each of the 38 colonies. The data gathered will be used to monitor and predict future population changes, and assess how vulnerable the colonies are to the effects of environmental changes.”