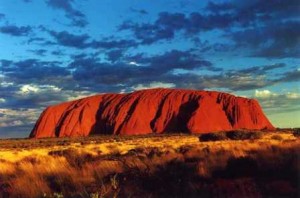 Earth Science Explorations Down Under
The Red Heartland of Australia

You may have followed this post from our other reflections across Australia and now we head into the heart of the continent to experience Uluru, Kata Tjuta and Kings Canyon.  These formations are fantastic evidence of past continent building processes!  The flight from Cairns to Uluru was in itself an education in biome change and orographic effects.  The quick ascent out of the harbor area of Cairns gave us one last glimpse of the reefs and quickly raising shoreline before crossing the western ranges.  While the Daintree river basin was clouded over, it afforded a great shoreline view and we were able to see the raise in the landscape.

Once we crossed the range, the arid continent pulled back the clouds to give us our first view of the ancient landscape below.  The ground hints at stories of past folds, buckles and mountains that have since worn away with time. The anticlines in the foreground have been cut through by a local river

And with the continents unceasing march to the equator, evidence of the thirsty mid-latitudes is left imprinted in the regions red landscape.  Windblown dunes are currently stabilized by species quick to grab hold any time water is available.  Water in Australia is seasonally available in most places and the saline lakes that surround the region shown below are on their way to drying out with the approaching spring.

After flying halfway across the country, our first amazing glimpse of Uluru (Ayers Rock) from the plane was a powerful and somewhat emotional experience.

Uluru’s sedimentary rock is known as arkose where as Kata Tjuta consists of Mount Currie Conglomerate. This is evidence that Uluru must have been further out from the mountain storm surges long after the larger boulders had settled out of the rushing waters from the mountain valleys.

In a later geologic age, after much of the mountains had been worn down, the region experienced other compressing forces which submerged the area into a shallow sea.  Silt laden run off from surrounding areas blanketed the roots of the old mountains and their alluvial fans in sediments that helped compress and cement the sands into the stone they have become today.  Eons later the region around Alice Springs began mountain building which uplifted and folded the area around Uluru exposing it to a much wetter climate.  Wind and rains began to easily erode the finer ocean laid sediments away leaving the hardened sandstone features of both Uluru and Kata Tjuta.

A trip to this region wouldn’t be complete without the 60 mile drive to see Kings Canyon.  Kings Canyon is formed by a creek eroding one side of the George Gill Range. The range is composed of two deep layers of sandstone with a thin impervious layer between them.

The canyon was uplifted earlier but it owes its origin to forces involved in the mountain building around Alice Springs over 350 million years ago.  The uplift during that time caused the upper layer of sandstone to crack but left the underlying layers whole.  This was important as watercourses took advantage of these cracks to erode the canyon.  Water racing down one crack met a joint and turned the canyon almost 90 degrees at the Garden of Eden pool just before the canyon falls into the plains below.  The sandstones act as wonderful storehouses for what little rain falls in the region.  The water finds its way down to the impervious layer then over to the canyon floor through seeps.  The moisture has preserved a complete ecosystem isolated for millions of years as the rest of the continent has gone through large changes in climate.  Some of the species such as the cycads shown below are part of a relic ecosystem that has changed very little for millions of years.  The combination of over 578 plants includes rare and some endemic plant species that make the canyon truly live up to its name as a Garden of Eden.  Water seeps at the canyon floor support a wide variety of diverse plants and animal communities sheltered from the continents normally dry conditions.

We have reached the end of our Earth Science Explorations Down Under blog and thank you for joining us and the American and Canadian educators and their families as we traveled on the magical continent of Australia.  Over the past several weeks, we have been thinking about why we lead these international expeditions and what they offer to the participants and to us.  Upon pondering this question, we have come up with several conclusions.

The collegial friendships made on these trips are a valuable resource teachers carry with them throughout their careers. Educators are encouraged to find out they are not alone in their attempts to incorporate global understanding and spatial technologies in their classrooms.  They can continue to reach out to their newly found friends for help and understanding when they are back in their classrooms.  World travel experiences broaden teacher’s perspectives to see all the topics they cover in a larger context.

Through using geospatial technologies during these global field experiences, teachers experienced the use of technology in ways that are transparent in the classroom.  The top resources teachers tell us they use from our trips are the photos that participants and leaders pool so they can be used by all travel participants in classroom or local presentations.  Some teachers also create presentations to show their administrators, classes and families what they have been involved in during the summer to affirm the investment of time and money in the trip.

We believe when teachers finish their global studies/technology travels with GSA and GISetc, they return to their homes and teaching assignments with new friendships, confidence in their knowledge of content, encouragement from new colleagues, photo resources, technology and data that we collected during the trip.  We know that Gary Lewis from GSA (www.geoventures.org) and ourselves, Roger and Anita Palmer of GISetc (www.gisetc.com, would find it difficult to find a more enjoyable, inquisitive, and easy going group of educators and family members to travel with!