NYPL Turns to the Crowd to Develop Digital Collections 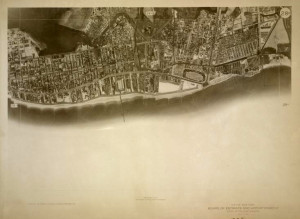 Crowdsourcing projects have one thing in common: they harness the power of large, undefined groups to accomplish specific tasks. Participants pool their money to support a new company, brainstorm ideas to solve an industrial problem, contribute photos and videos, and tag museum objects. They are connected by time rather than place, interest rather than edict. If two heads are better than one, the conventional wisdom goes, then an online community of millions ought to be the most productive engine of all.

Users are generating that reality every day at The New York Public Library through a landmark crowdsourcing endeavor, Map Rectifier. It allows users to “rectify” historical maps by overlaying them on modern ones. With every map rectified, users are supporting research in the humanities.

NYPL’s Geospatial librarian, Matt Knutzen, is excited about crowdsourcing’s potential for their map collection. “You can study anything through geography, through a spatial lens,” he says. Using NYPL’s Map Rectifier, amateur cartographers align old maps with current ones to “create a historical framework for geographical information.” The maps convey much more than the locations of roads and landmarks; each layer incorporates multidisciplinary data to illuminate a specific period in a region’s development. Demographic data could chart patterns of migration. Nautical data could track changes in a harbor’s bathometry. Maps of defunct factories could have real-world implications for environmental remediation. “We’re not positioning ourselves to answer those questions,” says Knutzen. “We’re enabling people to find those answers.”

for more information view the full article from the Huffington Post