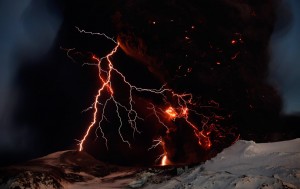 As ash from Iceland’s Eyjafjallajokull volcano continued to keep European airspace shut down over the weekend, affecting millions of travelers around the world, some government agencies and airlines clashed over the flight bans. Some restricted airspace is now beginning to open up and some limited flights are being allowed now as airlines are pushing for the ability to judge safety conditions for themselves. The volcano continues to rumble and hurl ash skyward, if at a slightly diminished rate now, as the dispersing ash plume has dropped closer to the ground, and the World Health Organization has issued a health warning to Europeans with respiratory conditions. Collected here are some images from Iceland over the past few days.