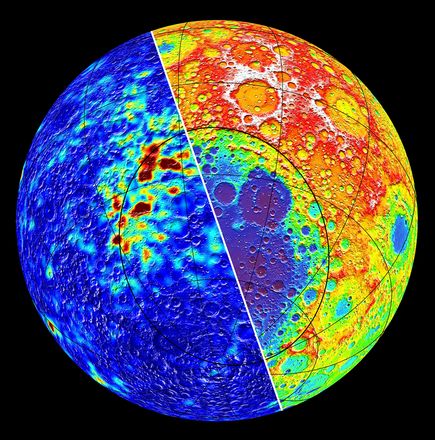 Image courtesy Science/AAAS – The moon’s magnetic rocks are pictured to the left in dark red.

Unlike Earth, the moon has no global magnetic field, but patches of the satellite’s surface are magnetic. According to new models, these unusually magnetic pockets come from an asteroid that slammed into the moon when it had a magnetic field, billions of years ago, according to Mark Wieczorek, director of research at the Institute of Earth Physics of Paris.

In general, heating metal in a rock and then cooling it imparts magnetic properties—the most common way Earth rocks get magnetized. “Many of the meteorites we see on the Earth contain large abundances of metallic iron. They’re roughly a hundred times more magnetic than typical rocks you can see on the moon,” said Wieczorek, who co-authored a new study on the phenomenon.

On the moon, “if we can get enough of these asteroid materials”—heated by impact—”in a certain region, that would create a magnetic anomaly that would be a hundred times stronger” than the rest of the moon.

To study this in further depth and see what this discovery might say about other planets in our solar system, read the full article here.