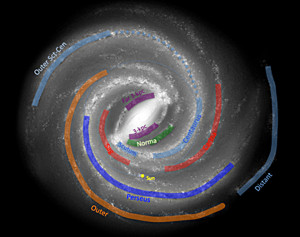 Astronomers base that assertion on their discovery of a vast section of a spiral, star-forming arm at the Milky Way’s outskirts. The finding suggests that the galaxy is a rare beauty with an uncommon symmetry — one half of the Milky Way is essentially the mirror image of the other half.

Thomas Dame and Patrick Thaddeus of the Harvard-Smithsonian Center for Astrophysics in Cambridge, Massachusetts say the structure they’ve discovered is most likely the outer extension of the Scutum-Centaurus arm from the inner galaxy. The finding suggests that Scutum-Centaurus wraps all the way around the Milky Way, making it a symmetric counterpart to the galaxy’s other major star-forming arm, Perseus.

The two arms appear to extend from opposite ends of the galaxy’s central, bar-shaped cluster of stars, each winding around the galaxy, the researchers note in an upcoming issue of Astrophysical Journal Letters. Click here for the full article by Ron Cowen from Science News.