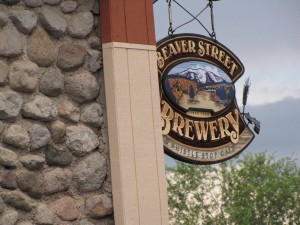 Today was less for the gourmand but we did find a nice little Thai restaurant in Flagstaff called Dara Thai.  Anita had a stir fry vegetable plate with mung bean thread that was light and flavorful.  Rog had spicy rice with shrimp and chicken.   It’s great to spend time in the college district of a smaller Arizona town and casually listen to what’s important in the lives of young professionals and college students.  What dramas are going on in their relationships, what new classes they are taking and lamenting or enjoying and particularly what dreams they have for their own future.  Our meal was delicious and due to brown rice and tofu was wholesome to boot so we were really quite satisfied.  Two thumbs up and if you are in Flagstaff, don’t hesitate to eat at Dara Thai. 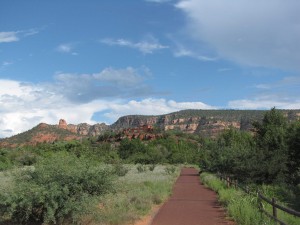 While Anita was sleeping in a bit, Roger was standing at the edge of Meteor Crater in AZ looking at a two mile in circumference that struck Earth.  Standing on the upraised edge of the world’s most well reserved meteor crater 20 meters above the average level of the plains, I am floored by the force that a football size chunk of matter moving 80 miles per second can create.   The divett, two miles in circumference must have been witness to quite the cataclysmic event!  This event that occurred approximately 50,000 years ago released more energy than any force currently available  in the world’s nuclear arsenal is an important example of how our world came to be in this solar system!

After returning from the crater, we had a lovely lunch with friends at the Beaver Street Brewery on Beaver Street in Flagstaff.  Go figure on the name eh?  After lunch we had time for a ride to Sedona, about 25 miles south of Flagstaff along a winding, downhill road.  The surrounding landscape was like a child had taken red clay and plumped clumps one on top of the other into the most amazing formations.  It is impossible to describe the shapes and colors that accosted our eyes at every turn of the road.  One thing that Sedona did not have that Flagstaff and Los Alamos had….cool temperatures.  It was just about 100 degrees fahrenheit but shoot it was dry heat right? 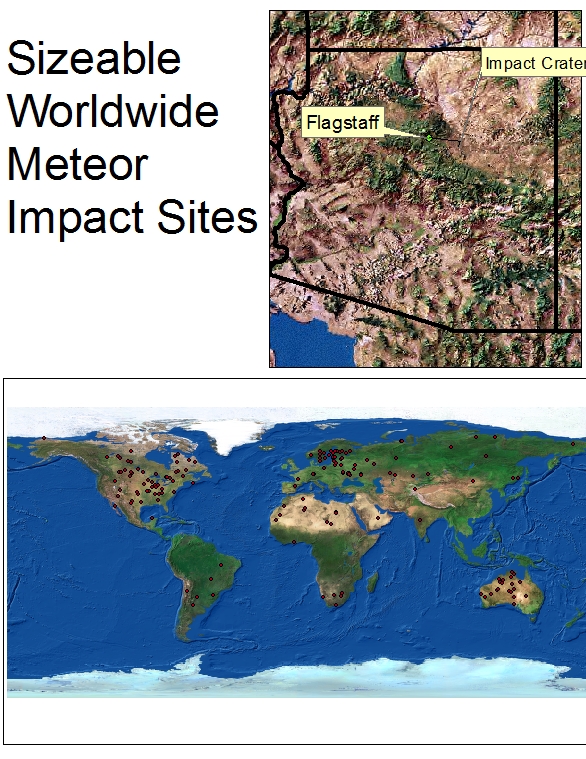 Gratuitous Science – Or More About Meteors

Along with the other seven major planets in the solar system (sorry Pluto) or other heavenly bodies of moons, asteroids, minor planets and exo-planets, Earth was formed from the coalescence of dust and growing cloud of matter known as a planetary nebula.   Our matter for our fledgling solar system must have been through the life and death of at least one other neighboring star in the galaxy.  This would be the only way that heavier atoms like carbon, silicon, nickel and iron could even exist.  All of the matter from origin of the universe was strictly hydrogen.  Only the interior of a star could squish these nuclei into helium, lithium, carbon, silicon and iron.  The star then had to reach the end of its life cycle and explode in a nova in order to send these heavier atoms out into the universe to recollect again into our star and orbiting planets.  These gasses, dusts and larger particles started to exert gravitational attraction to each other,  coalescing into our present day sun and planets.  When the mass was great enough the pressures at the center of our sun were strong enough to start its own nuclear fusion.  But not all the matter in the solar system was pulled into our center star.  Other centers of mass formed gathering dust, asteroids and meteor sized pieces of the puzzle and grew larger.  A body had to gather enough matter to begin crushing and melting the separate pieces together but couldn’t get so large as to start a fusion reaction or it would become a second sun.  Eight centers of mass had grown large enough and pack matter tightly enough to heat up and melt and form largely spherical bodies  (one more  reason Pluto was demoted).  Once our sun ignited it’s nuclear furnace, the solar wind or force of particles escaping the fusion at the core, blew away most of the smaller materials from the solar system.  The remaining bodies had appreciable size and traveled well defined paths around the sun for the most part avoiding each other.

On occasion, meteors, asteroids, and even planets can interact and throw one or the other out of orbit.  While this doesn’t occur nearly as often as it did when the planets were forming, there have been several  very large objects that continue to collide with planets within sight of scientists today.  A look at most other planets in the solar system shows clear evidence that these collisions still happen.  On a much less spectacular scale it is estimated that Earth gathers over 1000 tons of dust, meteors, and other debris from space.    So while movies have portrayed the idea of meteor impacts as a spectacular challenge to life on earth, life has found ways to recover from large impacts.  Dinosaurs as an example did appear to coincidentally go extinct at just the time of a large meteor strike near the Yucatan peninsula.  NASA and several private efforts do track objects in space that might have an impact on earth as we know it.  In July of 1994, the Schumacher-Levy meteor struck Jupiter.  Scientists had found and predicted its impact several months prior.   The meteor naturally broke into several pieces but the largest created an earth sized impact on the surface of our large neighbor.    Ideally, we would have months to years to plan to avoid impact with these large objects.