Maps: How We Engage With Our Cities 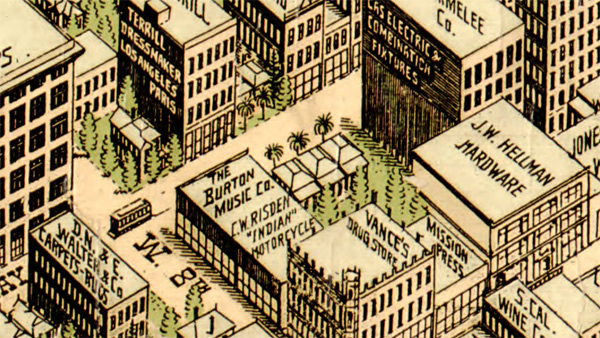 So you’re off to the Festival of Books. New place this year at USC, requiring a new route from your house. Do you grab an atlas off the bookshelf to figure it out? Unfold a paper map of Los Angeles? No. You go to the computer and hit Google Maps or MapQuest, Or you just go to the car and tell your GPS where you want to go.

It’s a subtle shift in how we engage our own cities, and the lives around us, which made for a fascinating hour at Saturday’s “Maps: Defining a City,” where authors Rebecca Solnit, Glen Creason and Denis Wood dissected how and why maps are more than just a way to find out how to get to the corner of Figueroa and Jefferson.

In fact, Solnit argued, there are infinite ways to map a city — a city like San Francisco, where she lives, and which is the focus of her “Infinite City: A San Francisco Atlas.” Each way of mapping is a different way of understanding it; streets tell us one thing, public transit lines another, the sites of natural waterways overlaid by a city yet another. Similarly, each of us has a myriad of memory maps of our own cities, both present and past.

“All of you are an atlas,” Solnit said. “All of you contain maps. You have this map of your world, this map where you grew up. Which is very different from the map of where your grandparents emigrated. People contain huge numbers of maps, and the paper maps we give them are just a reimagination of the orientation we already have…. Every person who lives in a city contains many sets of maps.”All three authors have published books built around maps. Creason, map librarian for the Los Angeles Public Library, dug deep into the vaults for his “Los Angeles in Maps,” which uses 72 maps to represent the city through different slices of the past.

“Each one has a story,” he said. “You could write a whole book on just certain maps.” And the contact changes over time and whim, even as the map itself remains the same. “Maps mean different things to different people at different times,” he said.

Wood’s book, “Everything Sings: Maps for a Narrative Atlas,” takes provocative looks at different slices of his neighborhood in Boyland Heights, N.C., including locations of lighted pumpkins on porches at Halloween, of the nighttime light patterns created by the glow of street lights, and of the colors of the ceilings of porches on private homes.

Such maps, he said, help you see where you live in a  different way. “The ways you utilize maps allow you to see something in an environment you walk through and experience all the time and don’t think about,” he said.

Something else we don’t think about: The art of maps. “Maps were walking down the road, came to a fork in the road, and beauty took one fork, and utility took the other,” Solnit said. “Then there’s stuff like Google Maps, which are as ugly as they are useful.”

– article written by Scott Martelle for the L.A. Times