Japanese Soccer Ball Lost During Tsunami Washes Up in Alaska 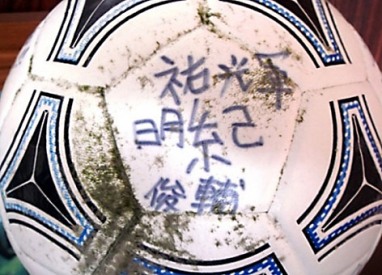 More than a year and thousands of miles later, a soccer ball washed away during the Japan tsunami has turned up on a remote Alaskan island and eventually could be headed back to the Japanese school grounds it originally came from.

An observant beach comber on Middleton Island, in the Gulf of Alaska, found a soccer ball and volleyball with Japanese writing on them. A school name is stenciled on the soccer ball, and his wife was able to translate the writing to trace it to a school. We have confirmed that the school was in the tsunami zone, but because the school is set up on a hill, it wasn’t seriously impacted.

This may be one of the first opportunities since the March 2011 tsunami that a remnant washed away from Japan has been identified and could actually be returned to its previous owner. When something gets washed up on a beach, unless it has a unique and traceable identifier, like the registration numbers on a boat, it can be difficult to tell if the item was set adrift by the tsunami, or if it was lost or discarded at sea some other time.

The soccer ball’s owner, 16 year-old Misaki Murakami, has been located and confirmed that this is indeed his ball. He lost everything in the 2011 Japan tsunami and is grateful that this object of sentimental value has been found. He received it in 2005 as a gift from his classmates in third grade before moving to a new elementary school, and one of the messages on the ball reads “Good luck, Murakami!!”. David Baxter and his wife Yumi plan to send him the soccer ball.

The NOAA Marine Debris Program has been monitoring floating debris from the tsunami for the past year, and some very buoyant items have already made the long journey across the Pacific. The derelict fishing vessel the U.S. Coast Guard ended up sinking off Alaska in early April had drifted at least 4,500 miles before being spotted off Canada’s west coast.