How NASA Makes Those Incredible High-Res Images of Earth 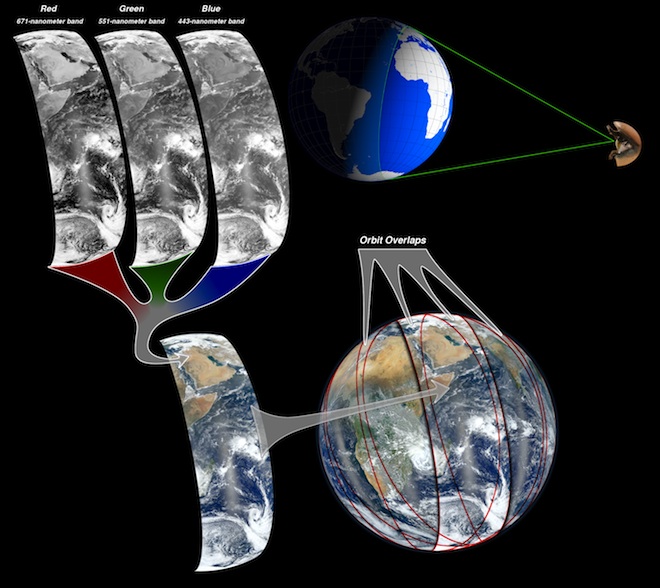 In recent weeks, a pair of high-resolution images of the Earth has captivated the public. Taken by the Suomi NPP satellite, these pictures portray our planet’s incredible beauty with 8,000- by 8,000-pixel and 11,500- by 11,500-pixel detail.

How were these highly detailed images created? The satellite flies 512 miles above the Earth, but the images appear as if they were taken from a much higher perspective: an altitude of 1,242 for the first image and 7,918 miles for the second. This little trick was accomplished by stitching together data from several orbits, creating an image that appears to be “pulled back.”

NASA launched the 4,600-pound Suomi in October to remotely sense variations in the Earth’s oceans, continents, and atmosphere and get a better understanding of climate change. It passes directly from pole to pole 14 times a day, imaging 1,865-mile swaths of our planet with each trip.

On board Suomi, the Visible Infrared Imaging Radiometer Suite (VIIRS) instrument takes pictures in red, green, and blue wavelengths. For the whole-Earth images, those wavelengths were combined to create a natural color photograph. It is not an exact representation of what an observer sitting in space would see, because particles in the atmosphere scatter short wavelengths of light, and our planet would actually appear more blue-tinged. The photos more accurately portray how the oceans and continents appear from the ground.

Oceanographer Norman Kuring, who compiled the two pictures, said the original image, showing North and Central America, was made as a favor to project scientist James Gleason who was looking for an ocean color image to show in a presentation. Word got out of the striking picture and NASA officials released it on Jan. 25, resulting in 3 million people viewing it in one week.

With the popularity of this first image and requests from the public for another perspective, the agency produced a second image on Feb. 3 showing Africa and the Arabian Peninsula.

The photos follow in the footsteps of NASA’s other great Earth images. The original Blue Marble — one of the most famous pictures of all time — was captured by the crew of Apollo 17 from a distance of 28,000 miles. Since 2002, the agency has stitched together up to 10,000 satellite images to produce other incredible detailed images. One of the most recent, from 2007, had a mind-boggling resolution of 86,400 pixels by 43,200 pixels.

Such pictures have proved time and time again to be among the most-viewed and best-loved NASA photos. What accounts for their enduring popularity?

“My guess is that people know that this is the only place we have to live. When they see an image showing these beautiful blues and greens, it speaks to them,” said Kuring. “This is our home.”