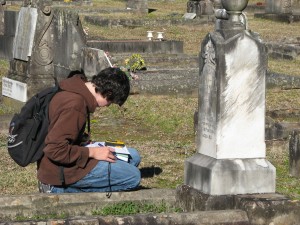 A visit to your local graveyard can provide not only a history lesson, but a science lesson as well.  Historians know that gravestones can reflect the lives of people whose memories are lost in time, and they have long scoured old burial sites to piece together the stories of those who rest there.

But today scientists are learning much more from those letters carved in stone. Gravestones are telling the story of changes in Earth’s atmospheric chemistry and rainfall. Moreover, scientists are asking for your help to read the stones.
The iconic white marble headstones found in most graveyards around the world are wonderful diaries of changes in the atmosphere.  Chemical interactions occur between the marble and the atmosphere over time. Little by little, atmospheric gases dissolved in rain drops cause the marble to erode. Changes in atmospheric chemistry also change the rate at which the marble weathers. By accumulating volunteers’ measurements of the marble gravestones of different ages around the world, scientists hope to produce a world map of the weathering rates of those gravestones and thereby deduce how the atmosphere has been changing.
The project is part of the new global citizen science program called EarthTrek.  People interested in participating can register online and follow links to the Gravestone Project or any of several other scientific research projects currently underway through the EarthTrek program. 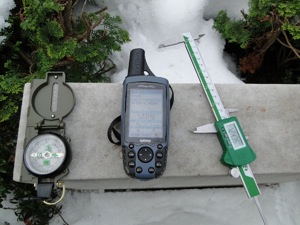 Participants are asked to take measurements using simple calipers and GPS, following a set of scientific protocols that are explained online.  Data is then logged by participants directly into the scientific database via the project Web site.

As a special offer to friends of GISetc, if you sign up to EarthTrek (its free!) via the EarthTrek website and select “GISetc” from the pull down menu of who introduced you to EarthTrek, you will be mailed a set of the EarthTrek calipers to allow you to measure gravestones FREE of charge (normally US $7.95 plus shipping).

update: The Earthtrek project has ended but the Earthcache site is a great alternative. Www.earthcache.org