We are blessed to have not one but TWO amazing featured lecturers booked for GeoTech 2012! Keep an eye on the blog for monthly GeoTech spotlights, sharing more information on the upcoming event. We hope to see you there! {click here for registration info} 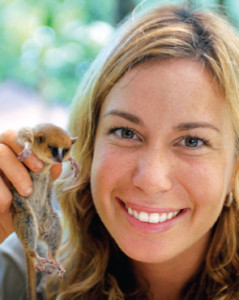 Mireya Mayor – *Wednesday Night Exclusive* An Emmy-nominated correspondent and National Geographic Emerging Explorer, Dr. Mayor discovered a new species of lemur in the jungles of Madagascar, and continues to increase conservation awareness through her insightful reporting. The media often refers to her in a number of ways, including, primatologist, anthropologist, wildlife expert, conservationist, explorer and the female Indiana Jones.

As a field correspondent for the National Geographic Channel, Mireya Mayor has reported to audiences worldwide on pertinent wildlife and habitat issues and earned two Emmy nominations. Closest to her heart is her ongoing study of a newfound species of Microcebus, or mouse lemur, which she discovered on a 2000 field expedition in Madagascar. Her work with this rare primate inspired the prime minister of Madagascar to establish a national park to help protect the new species, conserving the 10 percent that remains of the African island nation’s once vast forest. Mayor recently earned her Ph.D. while conducting research on the effects of forest fragmentation and isolation on two types of lemurs found only in northern Madagascar.

Mayor stars in the eagerly anticipated 8-part series Expedition Africa: Stanley & Livingstone (History Channel) as one of four explorers to retrace the nearly 1,000-mile trip of Henry Stanley & David Livingstone. Armed with only a compass and old maps, the explorers face challenging terrain, conflicting team dynamics, and diverse wildlife. Watch interview with Mayor about the series. The series debuts May 31, 2009.

When not deep in the jungle or on assignment, Mayor, a National Geographic Emerging Explorer, speaks to audiences about the importance of conservation for a vigorous and healthy planet. She is an especially powerful presenter for student audiences and we are thrilled to have her at GeoTech in 2012!