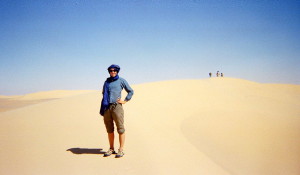 Hannah Moots studied anthropology at the University of Chicago, focusing on Africa, conducting research and excavation in Niger. Working in the fossil preparation laboratory at the University of Chicago, she developed an interest in palaeontology and archaeological research, leading to a Master’s degree in archaeological science from Cambridge University. Beyond laboratory based research, Hannah has worked in museum settings as a collections manager at the American Museum of Natural History in New York, and a historic interpreter for a monument site in Oyne, Scotland, demonstrating ancient techniques of bronze working and tablet weaving for visitors. She has taken opportunities to interpret archaeology and heritage for the public by teaching for Project Exploration in Chicago, as well as for the Higher Education Field Academy at Cambridge.

In 2000, a major archaeological discovery made in Niger by a team led by paleontologist Paul Sereno opened a window onto the “Green Sahara”. Called Gobero (GOH-ber-oh), after the Tuareg name for the area, the site revealed a 5,000-year-long drama of changing climate and changing cultures. Hannah will put the discoveries and the dates of the site into an historic context and personalize the science behind the story. Her first-hand experience with this project will make this a lively and exciting session.