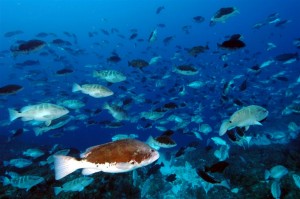 The Baby Grouper Adrift! project is part of the Grouper Moon Program, a Research collaboration between the Reef Environmental Education Foundation (REEF) and the Cayman Islands Department of the Environment.

Almost every ‘wish you were here’ postcard from the Caribbean features an underwater photograph of the region’s coral reefs; in addition to multicolored sponges and corals, the shot invariably frames one of the Caribbean’s best-known reef dwellers— the Nassau grouper. Nassau grouper are not just icons of the Caribbean; they are a social and ecological cornerstone of the region’s coral reefs. Historically, Nassau grouper represented one of the region’s most economically important fisheries. Unfortunately, due to intense harvest on spawning aggregations, their populations have dwindled to a fraction of their historic numbers. The species became the first Caribbean reef fish to be listed as endangered by the International Union for the Conservation of Nature (IUCN) and the species is candidate listed under the US Endangered Species Act.

The best way to protect and restore Nassau grouper is to protect their spawning aggregations. However, the establishment of marine protected areas on spawning sites often meets considerable political opposition from the fishing industry. While arguments against such protections are varied, they typically fall under two umbrellas—“the aggregating fish are from somewhere else, so we should fish them while we can”, or “fishing the aggregation will have no effect on the number of new fish in the future, since all grouper larvae arriving locally are from somewhere else”. Previous work by the Grouper Moon Project researchers in the Cayman Islands has convincingly demonstrated that all aggregating grouper are local (Caymanian fish attend Caymanian aggregations). The “Baby Groupers Adrift!” project aims to gain insight into the extent to which local Nassau grouper beget more local grouper.