While preparing for our upcoming trip to Europe, we ran across this article about patterns of earthquakes centered around the Mediterranean, particularly in Italy. This visualization of the history of European earthquakes illustrates the concentration of seismic activity across the Italian peninsula. 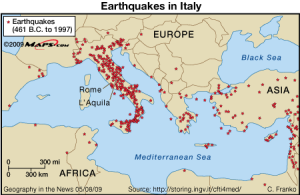 “In early April, Central Italy suffered the most devastating earthquake in 30 years. The magnitude 6.3 earthquake killed at least 272 and left more than 28,000 homeless, according to Associated Press reports. Numerous aftershocks rocked the region even as rescuers tried to reach survivors.

The boot-shaped Italian peninsula is one of the world’s most earthquake-prone regions. Although most of the quakes tend to be low-level events, an occasional one with a magnitude of 6.0 or higher can cause extensive damage to traditional stone and block structures. The most recent event even brought down some modern structures built with earthquake-proof engineering around the town of L’Aquila, 70 miles southeast of Rome.

The entire north side of the Mediterranean Basin is earthquake prone. The basin consists of a series of deep trenches between Africa and Europe. The trenches are products of the processes involved in plate tectonics. The trenches were part of the ocean floor until about 67 million years ago when the African and Eurasian plates began moving together.

When the collision intensified about 40 million years ago, it formed the Alps from part of the sea floor. As the collision continued, the peninsula of Italy was uplifted. Finally about six million years ago, the plates closed off the Mediterranean basin at both ends—at Gibraltar and the northwest end of the Red Sea. The entire Mediterranean Basin dried up except for a few small salt lakes.

Then about 5.3 million years ago, a horrific series of earthquakes along east-west faults at Gibraltar suddenly opened and the ocean began to flow into the Mediterranean Basin. For about 100 years, ocean water cascaded into the basin until it filled to sea level, forming the Mediterranean Sea.

Unlike the much older Appalachian Mountains of the Eastern United States, the rugged Alps on Italy’s north are considered recent or youthful mountains. The forces that created the Alps also deformed the bedrock along the northern side of the Mediterranean. The force fractured the bedrock, created faults, and broke the sea floor into smaller plates.

As the plates continue to move against one another, pressure builds along the many faults until movement occurs. Once a fault or series of faults slip and an earthquake occurs, the movement puts pressure on surrounding faults. Slippage among those faults, as after-shocks, may occur until equilibrium of pressure occurs. Regaining this equilibrium may take days or even weeks.

The Italian peninsula is composed of three major regions, the Alps to the north, the broad east-west Po Valley and the Apennines (mountains). The Apennines are the backbone of the Italian peninsula, being lifted, folded and faulted as the peninsula collides with a smaller plate to the northeast. On the southwestern side, a plate is pushing under the peninsula, according to United States Geological Survey (USGS) geophysicist Paul Earle. This “squeeze play” with adjacent plates is creating the conditions that resulted in the recent series of quakes in Central Italy. Such sporadic convulsions will likely continue.

Not only are earthquakes prevalent on the Italian Peninsula, but volcanic activity also occurs across the region. For example, the islands of Corsica, Sardinia and Sicily were created in large part by volcanic activity around the collision zones of the Mediterranean plates. Mount Etna is but one of several volcanoes located on the island of Sicily and has had more than 200 recorded eruptions, the most recent in 2001.

At GISetc.com we curate and bring you the best science resources from the web. We hope our sharing will keep you up to date on the latest science and geospatial news. Click here to read the full article from Lineback’s World View.