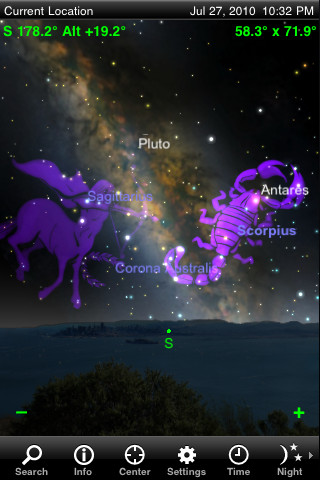 The basic version of SkySafari 3 shows you 120,000 stars, plus 220 of the best-known star clusters, nebulae, and galaxies in the sky. It displays the Solar System’s major planets and moons using NASA spacecraft imagery, and includes the best-known asteroids and comets.

SkySafari 3 accurately shows you the sky from any place on Earth, at any time up to one million years in the past or future. It includes encyclopedic descriptions of the constellations, stars, and planets written by professional astronomers. And it contains hundreds of images from NASA space missions, the Hubble Space Telescope, and the world’s foremost astro-photographers.

If you have an iPhone/iPad with a compass, or an iPod Touch with a gyroscope, SkySafari can help you identify stars and planets by holding your phone next to them. Tap the Compass/Gyro button (or shake your phone) to activate the compass – now, as you move the phone around, the sky chart follows your motion. Search for any object in the sky, and follow the arrow on screen to find it!

SkySafari 3 has a “Night” button to preserve your dark adaptation as you’re exploring the night sky. The Time Flow feature lets you animate the night sky using simple VCR controls – follow the motion of the stars and planets as SkySafari compresses days, months, and years into a few seconds.

And all this is just in the basic version! Don’t be afraid to start small – you’ll end with the universe at your fingertips! SkySafari’s streamlined user interface puts both power and simplicity into your hands – and turns your iPhone, iPad, or iPod Touch into an invaluable tool for exploring the night sky. SkySafari is more than just a star chart – it’s a celestial travel guide!