Apps We Love: Instead 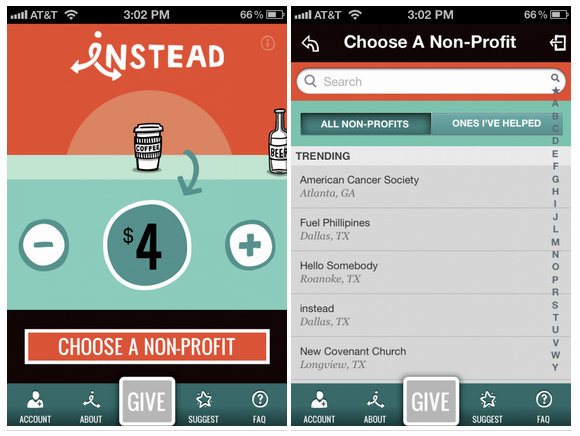 Giving money to charity is something we always have on our to-do list, but finding the extra money and remembering to actually do it is another thing.

Most charities say that it doesn’t matter how much money you give, because every little bit counts. App developer Ovenbits has come up with a unique proposition for you. When you’re at Starbucks, how about donating the money to charity instead? Instead of eating out, how about brown-bagging a lunch to work? Instead of seeing a movie, how about renting a film?

Living a consumption conscious lifestyle is a simple and fun way to support the non-profits that you are passionate about.

The iOS app is called “Instead“, and it’s meant to get your charitable giving into gear by putting micro-donations into context with things that you give up and make a charity happy instead.

It’s extremely well designed and serves as a great reminder that giving a few bucks to any charity makes everyone a winner in the end.

While this app won’t make donations all by itself, it does serve as a good reminder to give a little bit once in a while. I highly suggest giving prominent placement to Instead on your iDevice’s home screen, that way you’ll be sure to get in the giving mood one of these days.

After you open the app and set up a new account, you can tap the “Give” button, and choose a monetary value as well as what you’re giving up for the donation. The dollar value is completely up to you, but if you’re donating instead of buying a coffee, perhaps $4 will work quite well.