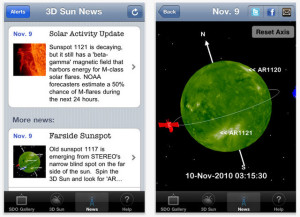 No seasonal affective disorder for us! Now you can carry your own personal sun with you on your iPhone, iPod or iPad with our featured app this week, 3D Sun!

If a  major solar flare erupts on the sun, your phone chirps in your pocket to let you know! Pulling out your phone, you see a 3D view of the sun — a digital reconstruction of satellite images freshly downloaded from NASA’s “STEREO” satellites, orbiting millions of miles away.

You can rotate the sun with your finger to view it from any angle. Pinch in and out to zoom in for a closer look at the sun’s ever-changing surface.

Now *this* is living in the 21st Century! 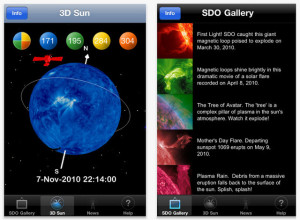 “3D Sun” lets you carry a virtual window onto today’s sun, right in your pocket. Open this app anytime to see what’s happening today on the sun’s ever-changing surface. See when major solar flares erupt on the sun’s surface. Track sunspots that reveal the churning activity inside the sun’s fiery inferno.

News alerts — provided by a Ph.D. trained astrophysicist — inform you of important solar events. Optional push notifications will alert you of the most important events even when “3D Sun” is not running.

Great for aurora watchers who want to be notified of when they should look up!

Along with the 3D view of the sun, this app is frequently updated with movies and image galleries of solar events, such as massive explosions on the sun and the beautiful auroras, or “northern lights,” that those explosions can trigger.

Developed in collaboration with NASA scientists.

NASA’s STEREO mission is a pair of satellites orbiting on nearly opposite sides of the sun. Together, these two satellites provide an unprecedented wrap-around view of most of the sun’s surface each day. “3D Sun” provides the first-ever 3D display of STEREO’s images, right on your iPhone.