Ancient Dry Spells, Megadroughts and the Future of Food 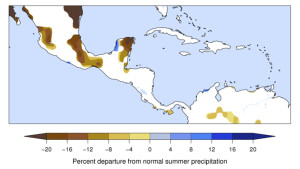 (from NASA) – As parts of Central America and the U.S. Southwest endure some of the worst droughts to hit those areas in decades, scientists have unearthed new evidence about ancient dry spells that suggest the future could bring even more serious water shortages. Three researchers speaking at the annual meeting of the American Geophysical Union in San Francisco on Dec. 5, 2011, presented new findings about the past and future of drought.

Ben Cook, a climatologist affiliated with NASA’s Goddard Institute for Space Studies (GISS) and Columbia University’s Lamont-Doherty Earth Observatory in New York City, highlighted new research that indicates the ancient Meso-American civilizations of the Mayans and Aztecs likely amplified droughts in the Yucatán Peninsula and southern and central Mexico by clearing rainforests to make room for pastures and farmland.

Converting forest to farmland can increase the reflectivity, or albedo, of the land surface in ways that affect precipitation patterns. “Farmland and pastures absorb slightly less energy from the sun than the rainforest because their surfaces tend to be lighter and more reflective,” explained Cook. “This means that there’s less energy available for convection and precipitation.”

Cook and colleagues used a high-resolution climate model developed at GISS to run simulations that compared how patterns of vegetation cover during pre-Columbian (before 1492 C.E.) and post-Columbian periods affected precipitation and drought in Central America. The pre-Columbian era saw widespread deforestation on the Yucatán Peninsula and throughout southern and central Mexico. During the post-Columbian period, forests regenerated as native populations declined and farmlands and pastures were abandoned.

Cook’s simulations include input from a newly published land-cover reconstruction that is one of the most complete and accurate records of human vegetation changes available. The results are unmistakable: Precipitation levels declined by a considerable amount — generally 10 to 20 percent — when deforestation was widespread. Precipitation records from stalagmites, a type of cave formation affected by moisture levels that paleoclimatologists use to deduce past climate trends, in the Yucatán agree well with Cook’s model results.

For more information from their findings  on the pre-Columbian collapse and the northeastern megadroughts and their projections on the future of food, cllick here to view the full article and video from NASA.