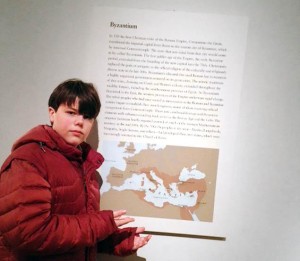 This is the power of teaching geography to our youth! Learn about a seventh grade boy who caught an error on a map hanging in an exhibit in the Metropolitan Museum of Art in NYC.

excerpt: “On his first trip to the famed museum, Benjamin Lerman Coady detected something was amiss on a 6th century map of the Byzantine Empire. The map purported to show the empire at its peak — but the brainy boy from Connecticut was convinced it was wrong. He told his mother the map was missing Spain and parts of Africa.

Benjamin’s mom, Joanne Lerman, had her doubts. ‘He’s 13 and we were standing in the Metropolitan Museum of Art,’ Lerman said. But Benjamin insisted he was certain the map was inaccurate and filled out a form at the front desk, detailing the error. ‘The front desk didn’t believe me,’ Benjamin told the Hartford Courant. ‘I’m only a kid.’

But five months later, in January, the museum’s Byzantine art specialist emailed the West Hartford teen.
‘You are of course correct about the boundaries of the Byzantine Empire,’ wrote curator Helen Evans.
‘You are the first person to recognize the mistake and we thank you for bringing it to our attention.’ ”

Be sure to follow the link to read the full article and share this with your students to show them that they can make a difference by paying attention to geography!