A Link Between Tornadoes and Seismic Activity 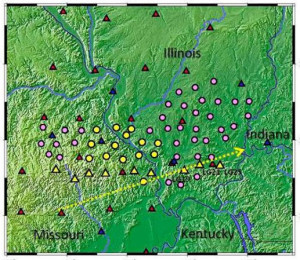 An Indiana University geophysical experiment detected unusual seismic signals associated with tornadoes that recently struck regions across the Midwest – information that may have value for meteorologists studying the atmospheric activity that precedes tornado disasters.

According to Michael Hamburger, professor in the department of geological sciences at IU Bloomington and one of the researchers conducting the experiment, “The seismograms show a strong, low-frequency pulse beginning around 4:45 a.m. on Feb. 29. Our preliminary interpretation, based on other seismic records of tornadoes, suggests that we were recording not the tornado itself, but a large atmospheric pressure transient related to the large thunderstorms that spawned the tornadoes.” The seismographs that detected the pulse are near Harrisburg, Ill., a town of 9,000 where a pre-dawn twister caused extensive damage, killed six people and injured about 100 more.

While seismographs have been known to detect seismic activity related to tornadoes, it is highly unusual to have state-of-the-art digital instruments recording information in such close proximity to a tornado, the researchers say.

For more of the research on this event, visit Science Daily.