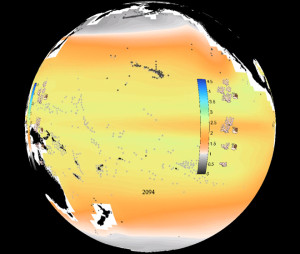 Some like to point to cycles when dismissing climate change, brushing off warming as simply being the thing that happens right before cooling. In this view, concern about climate change is akin to the naïve worry that half of schools are performing below average. This is why we need context. We need to know whether an observed change is more like a world premiere or a familiar re-run.

A new paper in Science examines the geologic record for context relating to ocean acidification, a lowering of the pH driven by the increased concentration of carbon dioxide in the atmosphere. The research group (twenty-one scientists from nearly as many different universities) reviewed the evidence from past known or suspected intervals of ocean acidification. The work provides perspective on the current trend as well as the potential consequences. They find that the current rate of ocean acidification puts us on a track that, if continued, would likely be unprecedented in last 300 million years.

There are several ways acidification events leave their signature in the rock record. The isotopic composition of carbon changes with shifts in the carbon cycle, such as the movement of greenhouse gases like methane and carbon dioxide in the atmosphere. Isotopes of boron present in marine shells track ocean water pH. The ratios of other trace elements in marine shells (such as uranium or zinc) to calcium indicate the availability of carbonate ions. (Ocean acidification is not just about pH, but the reduction of carbonate mineral saturation that makes it more difficult for calcifiers to build their shells.) In addition to all this, the fossil record records the extinctions and morphological changes in marine species that occur around catastrophic events in Earth history.

To learn more about the history of ocean acidification click here for the full article.