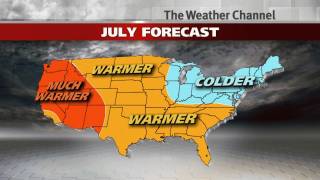 It’s heating up! As we roll into August, let’s take a look at temperature maps from around the globe…

The Weather Channel Companies have released their summer temperature outlook for 2013. Here’s their overall summer forecast:

“According to WSI Chief Meteorologist Dr. Todd Crawford, “The summers of 2010-12 were the hottest three consecutive summers in the U.S. since at least 1895.  The heat was due, in part, to a combination of (1) warmer-than-normal North Atlantic temperatures, (2) a lack of El Nino conditions and (3) expanding drought conditions. Heading into the upcoming summer, an examination of these factors reveals a lesser degree of consensus regarding heat relative to the past three years.  In particular, while a significant El Nino event is not expected, recent and expected warming in the tropical Pacific may occasionally support a pattern that favors cooler-than-normal temperatures in parts of the eastern U.S.  Further, we expect the most significant spring rains to impact areas from the Plains eastward, while the western U.S. will continue to dry out.  This evolution is more suggestive of a west-based drought this summer which would favor very warm summer temperatures there, and potentially cooler-than-normal temperatures downstream in parts of the eastern U.S.  Finally, there have been persistent trends in recent climate model forecasts towards a cooler summer across parts of the eastern U.S.  Our final analysis suggests that this summer will not be as hot as the previous three, but will still be characterized by widespread areas of above-normal temperatures, especially across the southern and western US. The best chance for below-normal temperatures this summer will be across the Great Lakes region.”

Click here to explore the month-by-month details from late spring to early summer.